Summary: (5/5 stars)  I’m not sure where I heard of Akata Witch; it was probably one of my podcasts. I was just excited to read a fantasy novel based on a magic system from a non-European mythology. I did not know it was a YA novel, though, and I was very delightfully surprised by what I found.

The story structure and plot aren’t exceptionally different from other stories of this sort: a young outsider learns that she has a destiny and finds camaraderie in a community of other outcasts.  But the characters are fun and interesting. The culture is lush and fascinating.  And the magic system is scary and fascinating.  Overall, I really enjoyed this book quite a lot.

Sunny is an albino Nigerian who grew up in the United States.  Now that she and her family have returned to their home country, Sunny’s life gets upended again when she learns that she is a “jaguar person,” an individual born with an affinity for magic.  And she has a vision of the end of the world.  Her only hope is to master her powers and to learn the other secrets of juju.  Fortunately, she has a group of close friends who have powers of their own, and a community of other jaguar people to help.

The story mostly focuses on Sunny learning more about her powers and juju as she explores the secret world of the jaguar people.  While she’s doing that, she makes friends with three other jaguar children.  The story culminates in a battle with an evil serial killing witch who is trying to summon the Devil.  But that last bit really is a very small fraction of the story and that’s my only complaint worth mentioning.

Although Black Hat is mentioned several times throughout the book and everyone is very upset that he keeps killing children, the good jaguar people seem to not only know who he is really, but what he’s trying to do.  And Sunny’s coven have no trouble at all locating him just as he starts calling up the worst demon ever.  They say they’ve sent other teams of witches to get him, but they’ve all gotten killed.  And I guess they wouldn’t want to tell the police because then the police would probably just end up dying.  But still.  I was aghast that everyone seemed to be just ignoring this maniac while these children are sent on VERY indirect lessons on how to use their powers.

I really like the characters in the book. The main characters are interesting and unique.  They have very clear and real strengths, but they also have flaws.  They manage to be impressive without seeming like Mary Sues.

So, overall, I thoroughly enjoyed this book and would definitely recommend it if you’re into YA fantasy books.

(5/5 stars) This is an exploration of shame as a punishment, as a fundamental human impulse, as a force for good and bad. Ronson goes into a little bit of the history of how shame has been used in the past, but focuses especially on how shame functions in our internet-based society today.  To wit, he explores several contemporary case studies in shaming. This book functions in some ways as a collection of essays rather than a structured exploration of ideas. As such, there are points where he pursues aspects of shame that seem to be a digression from the core theme, for example the parts about Radical Truth and humiliation paraphilia.  Those parts don't make the book less interesting, but readers should be warned: you probably won't come away with any strong conclusions about what can be done about internet lynch mobs.  In sum, this book is funny and thought-provoking. I highly recommend it.

I'm way behind on my book reviews again, so here's catching up. Also, a special announcement regarding future reviews on this site. 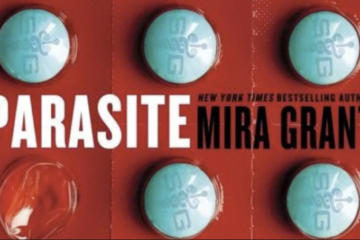 (2/5 stars) Strange, inconsistent characterization in the main character combined with an extremely predictable plot made this a distinctly un-entertaining read for me.  You can pretty much guess everything about this book from the summary on Amazon: A decade in the future, humanity thrives in the absence of sickness and disease. We owe our good health to a humble parasite -- a genetically engineered tapeworm developed by the pioneering SymboGen Corporation. When implanted, the Intestinal Bodyguard worm protects us from illness, boosts our immune system -- even secretes designer drugs. It's been successful beyond the scientists' wildest dreams. Now, years on, almost every human being has a SymboGen tapeworm living within them. But these parasites are getting restless. They want their own lives . . . and will do anything to get them. If you want a book about parasites taking people over, I would recommend The Girl with All the Gifts instead.  And in my parasite hobbyist's opinion, I think the chosen parasite in The Girl with All the Gifts makes more sense than a genetically modified tapeworm.