What is Free Will?

What do people actually mean when they talk about free will or volition?  I don’t have any answers to that question, but I think about it from time to time and I thought this time I would jot down some of my thoughts.

The thing that usually gets me thinking about this is Sam Harris.  He doesn’t believe humans have free will.  But I don’t really know what he means when he says that thing doesn’t exist. So, I went to try to find Sam Harris’s book Free Will but they don’t have it at the library for digital download. I might have to use an Audible credit on it or something.

Anyway, from listening to his podcast, Harris’s objection to the claim that humans have free will seems to be the fact that we live in a causal universe and, as biological mechanisms, he sees our behavior as complex, but deterministic.

As evidence, Harris sometimes cites studies that show that the biological process of making a particular decision happens before we become consciously aware of the decision we end up making. Thus showing that our experience of free will is actually just our biological machine tricking us into believing we made the decision freely when in reality it was determined already. The biological processes that produce the illusion of “self” also give that self the illusion of choosing things freely.

However, this seems like a nonsensical objection to me.

Assuming the phrase “free will” refers to something that can happen in reality and isn’t a claim on the supernatural or magic or something, then of course the machine that is our body is behind it. That is necessarily true. Further, it also seems to me unavoidable that there are aspects to the biological process of thinking and making decisions that precede our conscious awareness of those acts. Consciousness itself doesn’t just erupt into our minds with no antecedents. I am sure there are all sorts of pre-consciousness processes that happen in the brain all the time.  For example, when you see something, the part of your brain connected to your eye is stimulated by light.  But if you stop things there, it would not be sufficient to claim that you saw something merely because those ocular nerves were jiggling about, but did not tell the rest of your brain about what made them jiggle. Basically, if free will is an effect of our biology, then it seems common sensical to me that there are biological processes that precede that phenomena.

But I’m not sure what Harris really means when he talks about “free will.” If whatever he means requires that brains function without biology, then of course we don’t have it.  Harris seems honest and rigorous enough to me that I don’t believe he’s setting up a straw man here, though.  So, I just don’t know what he means when he says, “free will.”

The generally accepted definition of free will among Objectivists is that it is the freedom to think or not. Harris would sustain his objection, though, because there are conscious functions of the brain, which he if not most, would call “thought,” that cannot be controlled. But under Rand’s view, “thought” is not any action of the brain, but a higher level of action that deals with reason and concepts. “The process of thinking . . . is the process of defining identity and discovering causal connections.” [Galt’s Speech]

I’m not sure what Harris says or would say to that, but there are certain parts of what Rand describes as “thought” which people are not free to not do. Here’s an extended passage from Galt’s speech on thought:

All thinking is a process of identification and integration. Man perceives a blob of color; by integrating the evidence of his sight and his touch, he learns to identify it as a solid object; he learns to identify the object as a table; he learns that the table is made of wood; he learns that the wood consists of cells, that the cells consist of molecules, that the molecules consist of atoms. All through this process, the work of his mind consists of answers to a single question: What is it? His means to establish the truth of his answers is logic, and logic rests on the axiom that existence exists. Logic is the art of non-contradictory identification. A contradiction cannot exist. An atom is itself, and so is the universe; neither can contradict its own identity; nor can a part contradict the whole. No concept man forms is valid unless he integrates it without contradiction into the total sum of his knowledge. To arrive at a contradiction is to confess an error in one’s thinking; to maintain a contradiction is to abdicate one’s mind and to evict oneself from the realm of reality.

Is the first step of perception part of “thought?” If so, Harris would argue that the mind is not free to not perceive things in lots of situations. And although we may sometimes disregard the input from our senses — like when you’re concentrating on something, you may not realize you’re hearing loud noises or that you’re hungry or that something in your immediate area has changed dramatically — one can’t typically opt out of those perceptions through conscious effort to that end. You can’t just say, “I am not going to hear any sounds in the range of middle C,” for example, or “I will not see the color blue,” or “I won’t feel a spider that climbs up my left leg, but I will if it climbs up my right.” That’s just not how it works.

That descriptions of the process of thought quoted above are necessarily very cursory. They’re given in a speech in a novel in which a character offers a very long speech that summarizes Rand’s entire philosophy.  People complain about the length of that speech (and other speeches in the book) but if you consider the philosophical ground that is covered, it’s a pretty impressively efficient composition.  but I digress.  My point is that this description does not sufficiently proscribe the mental processes that constitute “thought” from those that do not, so I can’t test the veracity of the claim against current scientific understanding of neurology, which is where Harris is coming from on this.

Here’s another representative statement of the Objectivist view of thought and free will from Rand’s essay “The Virtue of Selfishness“:

Thinking is not an automatic function. In any hour and issue of his life, man is free to think or to evade that effort. Thinking requires a state of full, focused awareness. The act of focusing one’s consciousness is volitional.

So, I’m back to square one. I don’t really understand what is meant by the phrase “free will” or “volition.”

I may have sold myself on buying Harris’s book with this blog post. 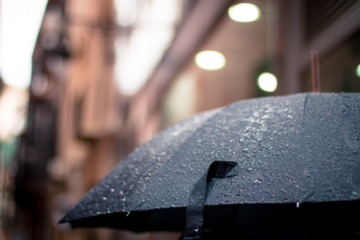 Pay It Forward in Real Life

Last winter was a pretty rainy one here in the Bay Area.  I can’t remember what happened exactly, but I found myself in the city without my umbrella.  This is unusual because I carry an Read more…