After over 137 hours of play, I’ve done all I can or am willing to do in the world of Assassin’s Creed: Valhalla. That’s not to say I didn’t enjoy it. I did. But my gameplay was fraught with bugs and the game has the typical repetitiveness of the AC series, so I was pretty tired by the end.

Before I get into it, the basic story premise of this game is that you’re a Norse warrior who comes with their clan to England to start a colony. Because you’re the second in command in the clan, you’re charged with building alliances in other counties and territories across Mercia, the midland kingdom. There is, of course, the “real world” element with the Animus, which is less fun or interesting than exploring “genetic memories,” but — no spoilers — at least this time there is a consequence in the real world more directly connected to what happened in the distant past. Your clan leader, Sigurd, has befriended a couple of Assassins and that’s how you get introduced to elements from past games, but in a twist, you aren’t actually a member of their club.

Let’s start with the things I enjoyed. The world is lush and elaborate. Although there are some cookie-cutter elements in ruins or cottages or trees, it’s overall very detailed and each region has its own character and landscape. There are swamps and lakes and mountains and forests and snowy places and more. It’s gorgeous and illustrates well why I enjoy open-world games.

As in Odyssey, I also like that I got to choose to play as a female character. But I wish I had played using the male version of Eivor. I don’t mind the historical inaccuracy, but the game makes gender largely irrelevant. There are other places with women as leaders and you encounter female fighters elsewhere, too. There are gay men and women and aside from a few small comments, most characters didn’t even acknowledge that my Eivor was a woman. But because there are options for romantic liaisons with men and women, I’d have preferred to play as a dude so I could smooch dudes. That’s just how I roll. Odyssey had those options as well, but I didn’t encounter many of them because the map was so sprawling that I wasn’t willing to do every side mission.

Sidebar: I wish the AC folks would make an installment of the game where you play as a woman and gender does matter. I’ve suggested in the past and I’ll suggest again: imagine a game set in WW1 where you play as a member of a ring of women spies led by Mata Hari. I think there’s a lot of opportunity there for a really cool game that doesn’t ignore gender dynamics like in this game, but allows the character to embrace it and use it.

Speaking of the map and side missions, the map is much more accessible in this game. Travel was so tedious in Odyssey that I just gave up trying to track down every artifact and mystery. But I found every major treasure, artifact, and mystery in Valhalla in no small part because I could easily ride my horse to them on my way to other missions. I’m also one who likes to complete lots of side missions to level up my character before completing the main story. So, I was wildly overpowered by the time I took on story missions, which I find fun.

The skill tree is ELABORATE in this game. There are some 400 different nodes. Fortunately, you can automatically assign your skill points. But what I liked about it was that after I filled up the skill tree, XP went toward “mastery points” which would add power to one of the three branches of the three. So, I didn’t feel like I was wasting my time getting more XP.

Excalibur and Mjolnir are fun weapons in this game.

Now, let me complain a little. The most annoying part of this game was all the bugs. The game crashed many times while I was playing and I was set back to the previous save. There’s one mission — the one in which I’m supposed to reconstruct the death of Ragnar Lothbrook — that I just could not complete. No matter how many times I used my Odin sight in the snake pit, nothing would happen. Apparently, there’s a known bug there. I also encountered invisible ropes. The ropes you can walk across between elevated points would have the starting segment but everything else was missing beyond that, so I knew it was there and I could walk on it, but it was invisible. I found floating lanterns, seagulls trapped in castles, and just loads of weird artifacts. I had to load from recent save on several missions to get them to play the cut scenes and let me complete them. I had to buy a cattle farm and a grain farm twice in my village. Literally, paid twice for them because the first time didn’t take. So, I couldn’t get my village fully upgraded because there’s a limit on the amount of raw materials that you can get in the game.

My other major complaint is that sometimes it just was not clear what you were supposed to do or where you were supposed to go to complete a mission. For example, I found a pregnant lady in a valley who said I needed to take her to the top of a hill to give birth. WHICH HILL? I only found out through trial and error as she would jump off of my horse if I got halfway up the wrong hill. Or the time I had to find a kid “over there.” Over where? And my crow nor my Odin Sight could help me with these things. I either had to google them or just wander around until I figured it out.

The story didn’t flow well. There were times when I would meet someone and love them and then the next time I met them we would be arguing about something stupid. The general thrust of the story was cool, but the particulars didn’t make sense to me. (BTW, I found out too late that there were actually alternate endings. Fortunately, I’d made good choices to get a good ending.)

Another minor complaint: I didn’t like the Norse mythology missions/story. While I got the tie-in to the story, I felt like this was long and unnecessary.

Strangely, clearing out the Order of the Ancients also came off as secondary to Eivor’s primary concerns in this story. Most of the members of the order were people I hunted down merely as an after thought. And don’t get me started on the elimination of the main leader of the Order in England.

Things I did NOT complete:

So, anyway, this was a fun play. I spent too much time on it, but I think it was a good entry into the series.

Just in time for my parental leave, a buddy of mine tracked down a PS5 for me and I was able to dive right in to the newest Spider-Man game. I loved the first one, Read more… 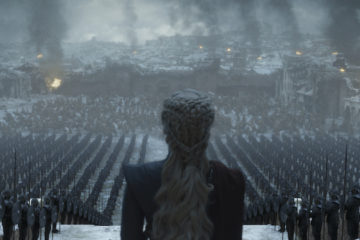 A discussion of my complaints about the last episode of Game of Thrones as well as storytelling in general and what audiences need to be told explicitly in order to understand what's going on.