Girls in the Boy Scouts and the End of Western Civilization

Today, the Boy Scouts of America Board of Directors unanimously approved to welcome girls into its iconic Cub Scout program and to deliver a Scouting program for older girls that will enable them to advance and earn the highest rank of Eagle Scout. The historic decision comes after years of receiving requests from families and girls, the organization evaluated the results of numerous research efforts, gaining input from current members and leaders, as well as parents and girls who’ve never been involved in Scouting – to understand how to offer families an important additional choice in meeting the character development needs of all their children.

Starting in the 2018 program year, families can choose to sign up their sons and daughters for Cub Scouts. Existing packs may choose to establish a new girl pack, establish a pack that consists of girl dens and boy dens or remain an all-boy pack. Cub Scout dens will be single-gender — all boys or all girls. Using the same curriculum as the Boy Scouts program, the organization will also deliver a program for older girls, which will be announced in 2018 and projected to be available in 2019, that will enable them to earn the Eagle Scout rank. This unique approach allows the organization to maintain the integrity of the single gender model while also meeting the needs of today’s families.

I think this is a smart move and, if I were a young woman, my curiosity about the opportunity to earn Eagle Scout would definitely be piqued.

I earned my Eagle Scout rank in high school. I was also a member of the Girl Scouts in order to help out with my sister’s troop, but because I’m a man, I was not allowed to earn any badges or rank.

So, as you might imagine, there are a lot of people absolutely freaking out about this change.  They see this as part of some nefarious progressive agenda to erase gender, emasculate our men, and destroy America and the whole of Western Civilization.

Here are two key points that I think people should keep in mind:

I think the reason for the change is much simpler than alarmists think.

Check out this slide deck. 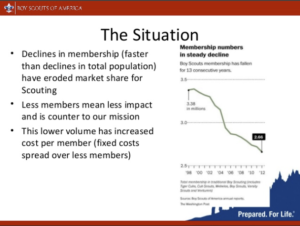 I believe this presentation presents the numbers and challenges facing a single district, but the decline in membership over the last decade has been widely reported.  If you care to scrounge through the BSA annual reports (I do not.) you can crunch the numbers for yourself. (As you’re going through the annual reports, you may note that the Boy Scouts already admits girls into certain programs. This change is merely an expansion of the programs that admit them.)

This isn’t a huge surprise.  There was the sex abuse scandal in the scouts.  And the BSA was very late in accepting gay and trans scouts/leaders, in my opinion. But when they did it led, of course, some to call for a boycott of the Boy Scouts. So, yeah. It hasn’t been a great several years for the Boy Scouts of America.

Purely from a business perspective, this seems like a completely rational move.  Don’t have enough customers, but you can expand into a new market with the flip of a switch? Obvious choice is obvious.

The decision may have the secondary benefit of making the organization appear more open and accepting and combat their reputation for being a source of “toxic masculinity” and all that.  But that’s a terrible basis for what is a business decision.

And maybe that’s what I need to emphasize here: BSA and GSUSA are businesses.

I think there’s a legitimate debate to be had over whether a co-ed leadership organization is better than single-gender ones.  The Girl Scouts of the USA suggest some factual claims relating to that argument in their reaction to the announcement:

The benefit of the single-gender environment has been well-documented by educators, scholars, other girl- and youth-serving organizations, and Girl Scouts and their families. Girl Scouts offers a one-of-a-kind experience for girls with a program tailored specifically to their unique developmental needs.

I still resent the BSA’s prior stance toward gay and trans scouts although I do support their right to admit (or not) anyone they like.  The cover up of sexual abuse is intolerable and I am still not convinced that all the guilty parties have been brought to justice and that the scouts have done anything to prevent it from happening again.  The religious underpinnings of the organization bother me a bit.

Although I’m an Eagle Scout, I have close ties to GSUSA. I grew up 40 miles from Savannah where the Girl Scouts was founded.  I have close friends — men and women — who have been GS camp counsellors, leaders, and scouts.  I think GSUSA does a phenomenal job at fund raising through their cookie sales. And I’ve been generally impressed with the benevolence and drive of their program and membership standards.

If my daughter someday expresses an interest in Boy Scouts or Girl Scouts, I will go with her in exploring those options. I’ll talk to her about what she’s looking for from these organizations and programs. And I’ll help her to make a decision about which (or both) is best for her. And if she chooses to join, I’ll try to keep a close eye on how things are going and make sure she’s not hurting herself or being hurt in her participation.

But to those who see this change in Boy Scout policies as part of some nefarious plot to undermine civilization: calm down. Be prepared. Be trustworthy, loyal, helpful…