I have a terrible tendency: I hide my processes.

I’ve been in a quiet mood for the past few days while I’ve noodled over this story I’ve been working on.  Husby has asked me a couple of times, “What’s wrong?” And I’ve said nothing is wrong, not fully realizing that the reason I was quiet is because I was working on this problem.

If I have a list of chores to do around the house, I am more likely to get them done if husby isn’t around.

There’s just something about “being seen” that absolutely crushes my motivation to get anything done.

I did recently take Gretchen Rubin’s Four Tendencies quiz and found out that I’m a “Rebel” and this does resonate with that finding. 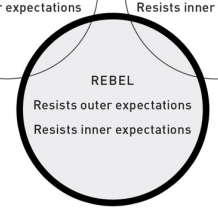 Rebels Unite! (But only if you want to)

It’s really a bad habit, because I’ve noticed that my husband is around our house a lot. It’s almost as if he lives here or something.  And the fact is that there is no shame in work or working through a problem.  Learning requires making mistakes, exploring new paths, and trying new things even if they seem absurd.

I think I have a subconscious desire to appear to be “perfect” on my first try at something.  As if I don’t have to do the hard work that mere mortals have to resort to in order to be good at something. Destructively, this plays directly into the path of imposter syndrome.

I’ve been trying to be more open about my processes at home.  When husby asks me what I’m doing, I’ve been trying to be open and honest about the fact that I’m working on a story or whatever.  I’m sure he’s also happy that I’ve also been trying to do more of the housework when he’s around. (I’ve always done what I think is my share, but I’ve hidden it from him a lot, which makes it hard to defend the claim that I do actually do my share.)

The difficulty, of course, is that I have to balance being open about things with avoiding creating expectations for myself that I will resist.

So, anyway, yeah.  Admitting you have a problem is the first step toward fixing it, right?