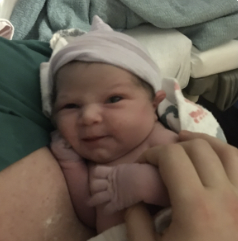 OK. Where to begin?  She was born Friday evening and she was 7lbs, 13 oz. And she was 19 inches long.  She was SOOO CUTE!  (As you can see in the above picture.) She also has a full head of black hair.

The pregnancy was really smooth. Our surrogate was amazing through the whole thing.  During her check up at the first of the month, the OB said she would probably go into labor at any minute.  Baby girl already dropped down and dilation had started.  In fact, the OB said she thought she’d go into labor that weekend.

No such luck.  There were a few contractions, but nothing sustained.  Her water stayed intact and everything was smooth sailing.  So, it was baby watch for the whole next week.  And when the OB met with our surrogate a week later, she was really surprised that she hadn’t given birth yet.  They scheduled an induction for Friday.

So, on Friday, husby and I drove up to meet with our surrogate. We all went out to breakfast and then went to the hospital.

It took the hospital a while (almost three hours) to get around to actually giving her the pitocin.  But they did get around to it and things slowly got moving.  At one point, labor actually backed up a little bit before moving forward again. But, eventually, our surrogate decided she should have that epidural and once that was done, the OB came by and said she would be in to check on her in a bit.

Doctors and nurses are heroes, but they have a rather different sense of time than average people in hospitals. This is because they are very busy and the average person in the hospital has their own problems at the top of mind.

But when she did come back and check, she was like, “Huh. I’m having a hard time finding your cervix… Oh, wait. That’s the baby. The baby is right here!”  Not to be caught flat-footed, the hospital staff scrambled and had the birthing room ready in approximately 2.3 seconds and they were ready to go!

Once our surrogate was in position and everything was set up, they put husby in a chair next to the bed and I stood right behind him. And then she gave ONE PUSH and the baby was here!!

I got to cut the umbilical cord and you can see in this screencap from a video our case manager made the moment when they handed our baby over to husby for some skin-to-skin cuddle time. 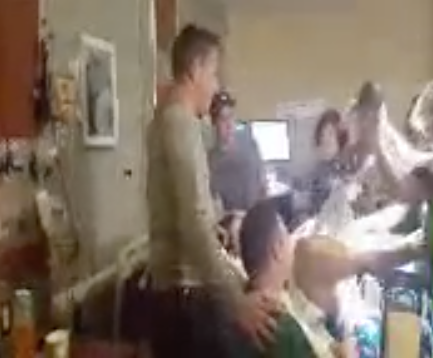 It was simply incredible.  Baby G (We’ll keep her name semi-private for the time being.) gave a big holler and waved her arms around. She is so perfect and beautiful and strong.  I was overwhelmed by the all.

The birth was nothing like what they show on television and in movies.  Part of that is our surrogate, of course.  She didn’t do a lot of screaming and cursing and all of that, but we could tell she was in pain. The epidural made a HUGE difference and I’m glad she got it.  From the time they administered the pitocin to the birth was only about seven hours.

It was evening, so we all stayed in the hospital over night.

G was really pretty chill throughout the night. She ate a big meal almost as soon as she was born and spent the rest of the time either sleeping or making the cutest sounds anyone has ever heard in their entire life.  Mostly, we were awakened by nurses who came in to talk to us about various things and to do checkups on our baby girl.  Interesting to me, although she had a bit to eat at midnight, she actually didn’t want to eat again until the next morning.  And she still managed to gain a bit of weight in the process!

We were very fortunate because our case manager is also a surrogate and while she was there at the hospital with us, she pumped some breastmilk and gave it to us. So, we were able to get G started on breastmilk right away.

The next day, our surrogate’s family and some of her friends visited and got to see the baby and everything. It was so cute to see her kids doting on the baby.  They all wanted to give her little kisses and feel how soft her skin is.

Our surrogate got to go home around lunchtime (I think. The times of things beyond feedings and diaper changes are kind of fuzzy for me right now.) and we hung around so that the doctors could be sure that G was off to a good start… and of course she was!  So, we were able to leave a little over 24 hours after she was born.

While we were in the hospital, I did have one of those classic “OMG Babies” moments. I was soothing her and she pooped, so I waited until I thought she was done and put her down to change her.  I did the whole “leg pump” move to help make sure she had it all out and was pleased to find that it worked. She was not done pooping.  But while she was finishing that up, she also started spitting up. And by “spitting up” I mean that she started to overflow from her mouth like a gas station toilet.  So, I’m holding up her bottom while she poops while also trying to help her turn her head to let the vomit out.  And trying to work the suction bulb to make sure she got it all out. AND get wipes and new diapers, etc. etc.  It was very exciting.  Lesson: thank goodness for washing machines. Things are going to get messy. There’s no avoiding it. Just try to contain it as well as you can and don’t sweat the small stuff.

Our first night was kind of rough, but not unexpected. We were already so tired from being in the hospital for so long.  (If you haven’t spent much time in a hospital, just know that it is not very comfortable.) So, I passed out as soon as my head hit the pillow.  I was so sound asleep that I didn’t even wake up when husby got up to feed her and try to stop her from crying.

The sleep I got allowed me to take over for him after that.  She was really fussy and just didn’t want to stay asleep.  As long as I held her, she was calm and quiet, so I ended up just staying up with her for a few hours. I eventually dozed off with her in my arms while rocking in the chair in the nursery.

And then husby woke up and took over from there while I went back to sleep for a little bit.

It was a team effort. I think with some better coordination we’ll be able to cover off on baby duty pretty well all things considered.  And we are absolutely listening to everyone who said to sleep when the baby sleeps.  That’s been pretty key for us already.

Now she’s working on Day 2.  She’s eaten a lot more than we expected.  She’s had some good bowel movements.  (BTW, I totally understand why new parents want to talk about poop so much now.  It’s really the only clear indication that things are going well.  So, if you want to know about that, just ask. I’ll tell you all about it.)

I’ve also learned that babies fart a LOT.  They aren’t smelly farts, but she’s a veritable bubble machine here and some of them are surprisingly loud.  Our dog, Ruby, is happy that we now have someone else to blame for the farts in our house.