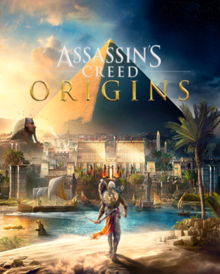 SUMMARY: (4 of 5 stars) The oddly flat style of art and a control layout that I found rather awkward gave me a bad first impression of this game, but I’m glad I stuck with it because it ended up being a lot of fun. The story is only so-so, but I enjoyed the new game mechanics.  Critics will likely complain that missions are repetitious, but that’s a hallmark of the series by now, right?

Unsurprisingly, this is the origin story of the Assassin’s guild that we’ve gotten to know in previous installments of the AC franchise.  There are a lot of similarities in the game play from the previous games and a few novel deviations.  It’s set in ancient Egypt during the time of Cleopatra and you get to climb around on ancient ruins.

Similarities include the sprawling open world with loads of side missions.  You can ride horses and camels. And there are some missions that involve sailing boats like in Black Flag.  You synchronize viewpoints and swan dive into hay stacks. And you stab people in the face. You can hunt animals, loot the bad guys’ booty, avenge local rebels/peasants, and do all that classic Assassin’s Creed stuff.

Differences include the fact that your eagle vision is literal eagle vision. You have an eagle. And you see through its eyes to locate treasures and bad guys. I actually really liked this shift in mechanics although it took a minute to get used to it.  An alien gave me a bird-horse thing at one point. That was fun. I looked it up and apparently it has something to do with Final Fantasy, but I’ve never played that game, so I’ll take their word for it.  I also felt like there was less stealth than in previous games.  I never had to hide in a crowd or pretend to be a monk.  But you can creep through the bushes and drag bad guys into hay stacks with you.  There are different bad guy types with more dramatic variations in capability.

There are some really odd details in this game. You can literally watch the guards pee, but you can’t really see any penises.  There’s a part where you go into a brothel and a couple is doing some rowdy sex.  They’re behind a screen, so you can’t really see anything super naughty, but still.  There is a fair amount of exposed female breasts, too.  So, this is probably not the best game for young children.

The outfits don’t seem to confer any advantages, so I played the whole game wrapped in a towel that I found in a bath house.  What?  Stop looking at me like that.  Also, in case you’re wondering, he’s wearing underwear, so you can’t see his junk when he squats down.  I checked just so I could provide this very thorough and accurate review.

You also get to play as a woman for a bit of the game.  Unfortunately, the women are still inferior players to the male lead character with weaker weapons and fewer abilities.  I really want them to flip the script on this game and play with some of the gender dynamics that would make a woman an excellent assassin character for a game like this.  I submit my suggestion again for having a story set in WWI with Mata Hari being the main character.  That could be really badass.

A few things you learn/see in this game:

Some of my friends have said they like the art.  And I have to say that the animation and environmental effects are simply incredible.  You encounter sandstorms and climb huge mountains.  There are deep fortress complexes and cave systems and other visually stunning things.  But there’s something flat and weird about the look of this game that put me off.  I got used to it, but still.

Also, my version of the game was super glitchy.  That’s another AC classic move, though, so I’m not surprised.

This isn’t a serious complaint, but the world is almost too big.  I ran out of patience with it and ended up just working to level up my dude so that I could kill elephants and beat the final mission.  Spoiler: you really only need to be about a level 32 to beat the main storyline.  At level 35, you could beat it comfortable.  At level 40, the main story mission is ridiculously easy.  But I never fully leveled up all my gear or my skill tree.   I’m told you can fight gods in this game, but those are intermittent events and I wasn’t a high enough level when they were available, so I didn’t get to do that.

Bottom line: if you’re a fan of open world games and the AC franchise, you’ll like this.  It really is one of the better installments in the series.

After over 137 hours of play, I’ve done all I can or am willing to do in the world of Assassin’s Creed: Valhalla. That’s not to say I didn’t enjoy it. I did. But my Read more…

Just in time for my parental leave, a buddy of mine tracked down a PS5 for me and I was able to dive right in to the newest Spider-Man game. I loved the first one, Read more…