With yesterday’s headlines about Trump’s tariffs on steel and aluminum, most of my right-leaning friends were in an outrage.  After all, protectionism is the antithesis of free markets.  But I wondered how Trump supporters who claim to also support free markets would react.  I didn’t have to wait long because someone commented on a FB post offering one of my favorite Trump defenses: 4-dimensional chess.

This is one of my favorites because there’s no actual evidence to these situations that suggests that Trump has the strategic vision to pull things like this off. Often there’s not even any evidence to suggest that there’s a causal connection between a series of events as in the situation above.

You can see in this situation that I started pressing this person for evidence to support their claim and I pointed out that 4% steel imports from China does not suggest that China could or would be concerned about these tariffs.  This person responded with:

To be fair to this commenter, although he’s a bit of a Trump apologist, I believe he’s just floating a hypothesis and not espousing some deeply held belief about what happened with the tariffs.  But it’s a hypothesis that hinges on a presupposition of the president’s strategic insight.

The facts as far as I am able to determine don’t support this hypothesis, though, for several reasons.

The most support I could find for this hypothesis was the comment from the South Korean national security advisor made in a press conference at the White House. “I explained to President Trump that his leadership and his maximum pressure policy, together with international solidarity, brought us to this juncture.”  The problem is that the counterfactuals to the hypothesis are equally plausible. The comment about Trump’s leadership and North Korean policy — which is hardly regarded as successful by all observers — is easily explained as polite flattery of the president who, reportedly, loves flattery. And notice that the “maximum pressure” they cite is Trump’s policy, not that of China.

So, it is not at all clear that these tariffs represent any significant amount of pressure on China or North Korea.  Rather, it seems to put unwanted and possibly counterproductive pressure on South Korea. I provide the above citations in support of my skepticism about the claim so that they might be addressed by someone who genuinely believes that argument.

This is how my part in the conversation concluded: 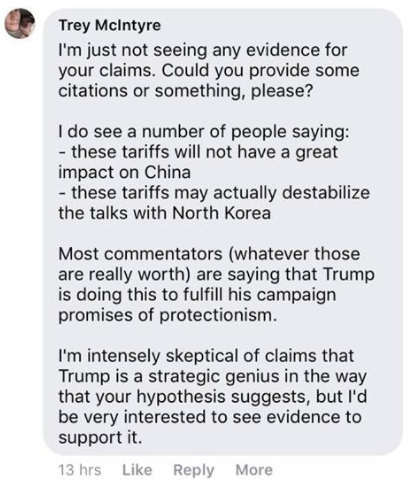 They blocked me in response.

The exchange got me thinking about the notorious 4-dimensional chess claim regarding Trump’s strategic thinking abilities. In case you’ve never heard of the internet and you are unfamiliar with the reference to chess, Know Your Meme describes its origin thusly:

The 4-dimensional chess argument can appear in pretty much any context. Any time the president does something that does not seem to support his stated objectives or those of his supporters, Trump apologists argue that he’s playing some form of chess involving the tesseract. I usually see it invoked to explain Trump’s inflammatory tweets as a means of distracting “the media” from other issues.

It’s not unusual for partisans to claim that their candidate is a genius and is doing things the opposition can’t explain.  The chess analogy was even invoked on President Obama’s behalf years ago. But this multidimensional chess argument seems to be particularly common among those who wish to explain away Trump’s more counterintuitive actions and comments.

Even hard-core Republicans don’t buy it, though.

It’s also patently obvious that Trump has sent the media into fits with some of his remarks and tweets. Recently he joked about having a lifetime term as president and many reported on it as if he were serious. (For those who oppose him and recognize that he was merely joking, the comments sounded more like he was joking on the square.) And I think there are some instances where Trump’s foolishness has distracted members of the press from something arguably more important.  But did Trump do it on purpose?  I haven’t seen any evidence supporting the claim either, but I’m willing to give some benefit of the doubt and accept that there is some non-zero chance that he’s done it on purpose at least once.

That’s the problem with denigrating an idea as a “conspiracy theory.” Sometimes, there really is a conspiracy about which one could have a theory. But I think this argument from Trump supporters has reached the level of the deluded sort of conspiracy theory.

From Wikipedia on conspiracy theories:

According to the political scientist Michael Barkun, conspiracy theories rely on the view that the universe is governed by design, and embody three principles: nothing happens by accident, nothing is as it seems, and everything is connected.[6] Another common feature is that conspiracy theories evolve to incorporate whatever evidence exists against them, so that they become, as Barkun writes, a closed system that is unfalsifiable, and therefore “a matter of faith rather than proof”.[7][8]

I think this aligns rather well with the Trump supporter/apologist’s view of things.

The political universe is being governed by design, Trump’s design. He doesn’t do anything by accident nor by mistake.  Things he says and does aren’t what they seem, as in the case of the tariffs which that Facebook commenter argued aren’t “an economic maneuver, but a diplomatic one.” (Even though Trump himself says it’s an economic/military one and military leaders say it is probably not helpful.) And the notion that everything is connected by Trump’s master plan is the very definition underpinning the whole chess analogy.

These arguments also lack evidence and are often accepted merely as an act of faith.  If you ask one of these Trump supporters to provide proof of the claim they can sometimes provide you with a litany of “seemingly” disconnected facts, but they are unable to provide a causal link between them and the end result. I’ve never even seen proof that Trump is acting to bring about those result intentionally beyond his willingness to affirm any praise and revel in even the worst kind of attention. It’s extra difficult when Trump’s actions coincide with some apparent success.  In fact, his winning the Oval Office could be described as one of these accidents that merely serves to support the theory.

Ironically, the FB person I am talking about above contributed to a short story anthology, Tales of Tin Foil, which is about conspiracy theories and paranoia. I am pretty sure this guy is not a full-on MAGA hat wearing Trump-supporter and, as I said above, I think he was just floating an idea, not espousing a firmly-held belief. So I want to take care to point out that there are degrees to which people buy into the 4D Chess Conspiracy Theory.

The weakness in my idea is, of course, that it’s not really a conspiracy per se.  Trump is just one person.  But the basic approach and the fundamental dangers are the same.

The flaw in a conspiracy theory is the same as with any delusion and it has the same dangers.  The flaw is that it’s not oriented toward facts and reality.  Instead, it appears to be a mutated form of confirmation bias wherein everything, including facts that work directly against the claim, are twisted to support the theory.  These people have the notion that Trump can do no wrong, so when he does something wrong, the explanation is that it must be something more that is actually right. The danger, then, is that people acting under these false beliefs will bring harm to themselves and others.  In the realm of politics, where the imputed hero of the 4D chess circuit is provoking tyrants with nuclear weapons and enacting devastating economic policies that will hurt millions the harm can be exceptionally widespread

The dangers grow even greater as the president promulgates additional conspiracy theories of his own about the media, the deep state, and his opposition.  Instead of providing facts and evidence to support his claims, he and his supporters resort to ad hominem fallacies of rejecting evidence based on the source, rather than by providing facts of their own. If the New York Times reports on someone saying that Trump’s policies are bad, then the policy must be good because the NYT hates Trump, they might say.

I am not a psychologist, so I wouldn’t dare speculate about the underlying psychological factors that might play into someone’s belief in this conspiracy theory. I do believe buying into them can be psychologically harmful, though. So, I worry for folks who espouse this 4D chess theory on a personal level.

I do not support Donald Trump and I do also believe that some parts of the opposition are a bit histrionic in their reactions to the president’s words and actions.  I also think there are people in media who are biased in their reporting of the news.  And, unfortunately, these opponents often lend an air of believability to the president’s spurious claims about “fake news.”

The growing partisan divide is not helping things, either.  The NYT has a really great opinion piece on this divide and how it manifests in public discourse.

Two terrible tendencies now feed off each other, growing stronger every day: the more smugness, the more satisfying to poke holes in it; the more toxic the trolling, the greater the sense of moral superiority. The result: an odoriferous stew of political rhetoric that is nearly irresistible to those on the inside and confusingly abhorrent to those on the outside.

I guess I’m outside because in spite of how the beginning of this essay looks, I am actively avoiding political debates on social media these days because the environment is so toxic and it seems like there is no agreement on facts, principles, or even what counts as basic civility. Did you know that there are people who earnestly do not understand that name-calling is uncivil discourse?

I don’t know how to combat these delusions about Trump, though.

I’ve lost at least one real life friend who subscribes to these theories. And I’ve lost lots more social media acquaintances about it as well.  The best idea I have is to simply and plainly ask to see the facts that support the claim and when the evidence isn’t sufficient to make the case, point it out.  But most online conversations fail to maintain a coherent thread long enough to really press the issue that far.

An honest, rational person has to admit that it’s within the realm of possibility that Trump will do something right.  Such a person needs to be prepared to explain why they support whatever that something is.  And, when he does something wrong, explain why they believe it’s wrong. An honest, rational person needs to be prepared to speak to the facts of the situation and stick only to the facts.

It’s tempting to speculate about what’s happening where we cannot see and I don’t think there’s anything inherently bad about such speculation.  But you should be clear when you’re speculating as opposed to drawing conclusions purely from the facts at hand.  And I don’t think speculation that runs counter to the available facts — as that FB commenter above was doing — is useful at all.

But maybe that’s why he blocked me.

Political Violence as the New Normal

Over the past few years, I’ve gotten in the habit of writing about my political views directly on Facebook where the audience is limited to my friends. Part of that is convenience and part of Read more…

Maybe Republicans are crazy, too!